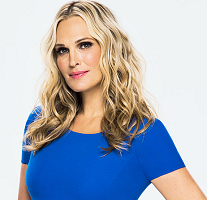 CoolSculpting is an FDA-approved fat-freezing procedure that is non-surgical and non-invasive in nature. It utilizes controlled cooling to remove excess fat that cannot be otherwise removed through exercise and diet.

The procedure utilizes a handheld device for fat reduction. The device is used to accurately freeze and eliminate fat under the skin’s surface.

CoolSculpting does not claim to be a comprehensive weight-loss solution. It should instead be used by people who are close to their ideal weight, ideally within 20 pounds of it. It is most suitable for patients who have a double chin and excess fat on their stomach or thighs.

Actress and model Molly Sims successfully underwent the CoolSculpting treatment before she became a spokeswoman for the procedure. In an interview with SunHee Grinnell of Vanity Fair, Sims shared the details of the procedure and the positive impact it had on her.

During and after pregnancy, Sims would eat organically as much as possible in order to curb her weight gain. Her pregnancy workout typically consisted of Pilates and stretching.

After pregnancy, she would work out five or six times a week. Sims does not have a fixed workout routine, as she likes to mix up her exercises to avoid boredom. She would exercise for at least 45 minutes on a daily basis while ensuring that she sweat copiously to maximize weight loss.

How Did CoolSculpting Affect Sims?

Molly Sims found out about CoolSculpting through her dermatologist when she was attempting to lose the last of the excess fat from her lower belly. She told Grinnell that she decided to undergo CoolSculpting when she learned that the procedure was FDA-approved, had zero downtime, and was non-invasive. The non-invasive aspect of the procedure particularly appealed to Sims.

According to Sims, she underwent the treatment twice for her belly. It is unclear what CoolSculpting applicator Sims used, as CoolSculpting applicators come in three sizes: large, medium, and mini. When Sims was asked to rate the results of the treatment on a 1 to 10 scale, the actress gave it a full 10. She also told Grinnell that she did not experience any discoloration, lumpiness, or loose skin.

Sims believes that you need to combine CoolSculpting with a healthy lifestyle and regular exercise in order to see the best possible results. If you don’t eat healthy food, chances are you may be disappointed with the results.

Sims also mentioned that there was no recovery period with CoolSculpting, making it perfect for people who don’t have the time required for recovery after an invasive surgical fat-reduction procedure.

Sims was able to see the results of the treatment within four weeks. The only con she experienced was that the treatment felt cold, but this would be a given as the treatment entails the freezing of fat. Sims has been spreading awareness of the brand of CoolSculpting and its numerous benefits compared to other forms of fat reduction after she became its brand ambassador.

Find out more about CoolSculpting during a consultation with experienced physician Dr. Nicholas Lam. Dr. Lam will be happy to answer any questions you may have. Arrange a consultation by contacting our office today.